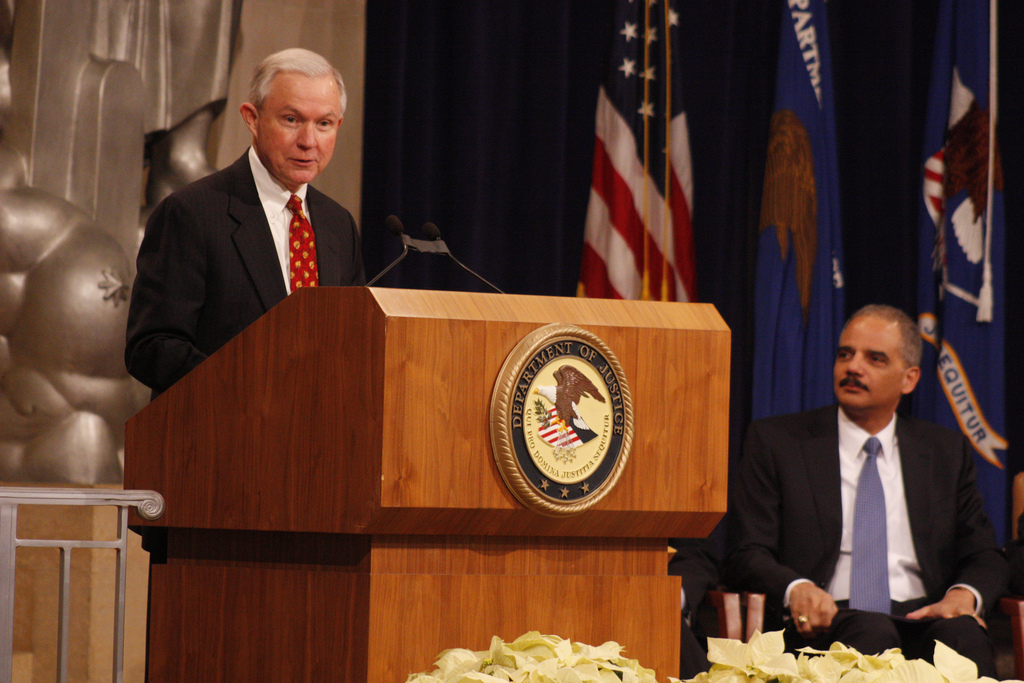 According to The Associated Press, U.S. Attorney General Jeff Sessions rescinded the Cole Memo today, an Obama-era policy barring Department of Justice officials from going after state-legal cannabis businesses. This move comes just after California, the nation’s most populous state, legalized adult use sales of cannabis. Previously, the Cole Memo has served as a kind of stopgap for states to conduct legal cannabis markets, giving them peace of mind that the federal government wouldn’t interfere.

Ushering in 2018 with a bang, California’s cannabis businesses finally celebrated their new market launch on New Year’s Day. Even CNN rang in the New Year with copious amounts of cannabis, sending journalist Randi Kaye to Denver where she was passed joints and even donned a gas mask bong.

One fifth of the entire United States population now live in states where adult use cannabis sales are legal. A majority of states in the country have some form of cannabis legalization law on the books.

According to The Associated Press, AG Sessions’ new policy will leave it up to federal prosecutors to determine how they wish to enforce federal law and the controlled substances act. Sessions has been historically conflicted with federal policy surrounding legal cannabis and has repeatedly expressed his disdain for the drug.

But his back and forth on policy directives has been largely symbolic until now. In January last year, Sessions said he would uphold federal law but expressed openness to ending the conflict between state and federal laws. In February of last year, he tied legal cannabis to violence in a press conference where he alluded to greater enforcement. But flip-flopping again in March of last year, he said the Cole Memo is valid and appropriate after a speech.

The Trump Administration’s confusing and often-unclear stance on cannabis has only fueled more speculation, worries and fear that cannabis businesses are no longer safe from federal prosecution.

The cannabis industry and politicians around the country were quick to respond to the AG’s new policy shift. Sen. Cory Gardner (R-CO) said he would be holding up DoJ nominees, “until the Attorney General lives up to the commitment he made to me prior to his confirmation.” The Cannabis Control Commission of Massachusetts, the regulatory body tasked with overseeing the state’s legal cannabis industry, says “nothing has changed” and that it will continue their work to legalize and regulate the cannabis industry.

Steve Schain, Esq., an attorney with Hoban Law Group, a prominent cannabis law firm, says this only fuels the confusion. “With Jeff Sessions threatening to singlehandedly crush $7.2 billion legalized marijuana industry spanning 30 states, generating millions in taxes and providing tens of thousands of jobs, much confusion abounds,” says Schain. “While unclear if merely a ‘knee jerk reaction’ to California program’s launch breadth of coverage, unless and until the United States Department of Justice provides an official statement, publication, or other specific information, neither legalized marijuana’s current status – nor the Federal Government lack of Congressional mandate or funds to derail state programs – has changed.”

Omar Figueroa, a well-known California cannabis attorney, urges clients and friends to start getting informed. “Which district is your ‘commercial cannabis activity’ operation(s) located? Who is the US Attorney for that district? What is that US Attorney’s cannabis policy? The answers to these questions just became extremely important. Please contact us for legal advice and representation.”

Advocates and activists were also very quick to condemn Sessions’ move, including Matthew Schweich, interim executive director for the Marijuana Policy Project (MPP). “This extremely misguided action will enable a federal crackdown on states’ rights with regard to marijuana policy,” says Schweich. “Attorney General Sessions has decided to use the power of the federal government to attack the ability of states to decide their own laws. A majority of Americans support legalization, and Sessions has simply decided to ignore their views. In the states where marijuana is legal, voters approved those legalization policies at the ballot box. This is a direct attack on the will of the people.”

“This news from the Department of Justice is disturbing, especially in light of the fact that 73% of voters oppose federal interference with state cannabis laws. But, the rescinding of this memo does not necessarily mean that any major change in enforcement policy is on the horizon. This has been, and still will be, a matter of prosecutorial discretion. We therefore hope that Department of Justice officials, including U.S. Attorneys, will continue to uphold President Trump’s campaign promise to not interfere with state cannabis programs, which have been overwhelmingly successful in undercutting the criminal market.

In addition to safely regulating the production and sale of cannabis, state-based cannabis programs have created tens of thousands of jobs and generated more than a billion dollars in state and local tax revenue to date. Any significant change in federal enforcement policy will result in higher unemployment and will take funds away from education and other beneficial programs. Those revenues will instead go back to drug cartels and other criminal actors.”

Could this move be a genuine policy shift that will cause a crackdown on the legal cannabis industry? One action that could prevent the DoJ’s ability to target cannabis businesses relies on a Senate vote passing the Leahy Amendment as part of the Omnibus Appropriations Bill. That amendment would prevent the DoJ from using resources to go after state-legal medical cannabis laws, but does not exactly protect companies operating under adult use and recreational laws.

Is it possible that this is just the Trump Administration moving public eyes away from the bombshell revelations in Michael Wolff’s book and Trump’s feud with Steve Bannon? The current administration has a history of creating headlines amidst unrelated controversy, deflecting a public relations crisis from the public eye.