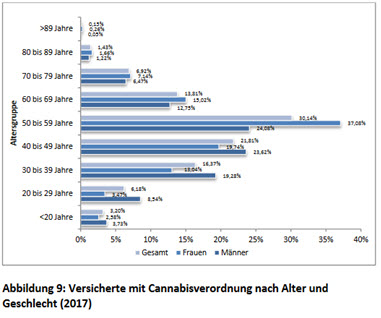 Techniker Krankenkassen (or TK as it is also frequently referred to) is one of Germany’s largest public or so-called “statutory” health insurance companies. It is companies like TK that provide health insurance to 90% of the German population.

TK is also on the front lines of the medical cannabis discussion. In fact, TK, along with other public health insurers AOK and Barmer, have processed the most cannabis prescriptions of all insurers so far in the first year after the law change. There are now approximately 15,000 patients who have received both a proper prescription and insurance approval coverage. That number is also up 5,000 since the beginning of just this year.

In a fascinating first look at the emerging medical market in Germany, TK, in association with the University of Bremen, has produced essentially the first accessible report on approvals, and patient demographics for this highly stigmatized drug.

Because it is in German, but also contains information critical to English-speaking audiences in countries where the medical issue is being approached more haphazardly (see the U.S. and Canada), Cannabis Industry Journal is providing a brief summary of the most important takeaways from TK’s Cannabis Report.

Most Patients Are Women

This is not exactly surprising in a system where symptomology rather than ability to pay is the driver of authorizations and care. This is also exactly the opposite trend when it comes to gender at least, that emerged in Colorado on the path to medical legalization circa 2010-2014. While chronic pain is still the most common reason for dispensation, the drug is going mostly to women, not men, in their forties, fifties and sixties.

Even Chronically Ill Patients Are Still not Getting Covered

This data is super interesting on the ground for both advocates and those who are now pushing forward on “doctor education” efforts that are springing up everywhere. The only condition for which cannabis was approved 100% was for patients suffering from terminal cancer pain from tumours. In other words, they were also either in hospice or hospital where this kind of drug can be expedited and approved quickly. Other conditions for which the drug was approved were both at far lower rates than might have been expected (see only a 70% approval rate for Epilepsy and a 33% approval rate for Depression).

Expect approval rates to change, particularly for established conditions where the drug clearly helps patients, even if there are still questions about dosing and which form of cannabis works best, along with improved research, data and even patient on boarding.

Also expect interesting data to come out of this market for patients with ADHD (or ADHS).

TK and other public health insurers are also on the front lines of another issue not seen in any other legalizing cannabis country at the moment. An eye-wateringly high cost per patient. The biggest reason? Most of the medical cannabis in the market is being imported. This will change when more cannabis begins to enter the market from other EU countries (see Spain, the Baltics and Greece) and, yes, no matter how many elements of the German government are still fighting this one when it begins to be cultivated auf Deutschland.

Most German Patients Are Still Only Getting Dronabinol

If there was one thing that foreign investors should take a look at, it is this. One year after legalization, just over 1/3 of those who actually qualify for “medical cannabis” are in fact getting whole plant medication or a derivative (like Sativex).

This means only one thing. The market is continuing to grow exponentially over at least the next five to ten years.