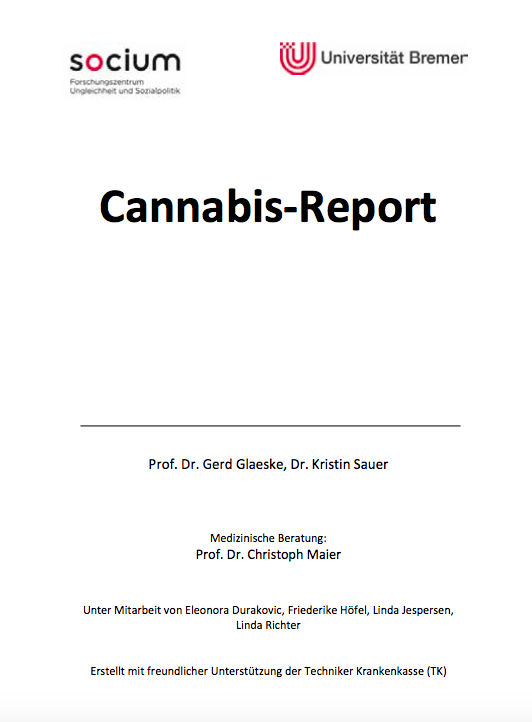 If anyone (read Auslanders) had any illusions that the German take on medical cannabis was going to be casual or unscientific if not painstakingly documented, think again.

Techniker Krankenkasse (or TK as it is referred to by the locals) is one of Germany’s largest public health insurance companies. In other words, it is a private company that is required to provide so called “statutory” health insurance which covers 90% of Germans.

As such, they are also on the front lines now of the medical cannabis debate. Approximately one year after the new law requiring public health insurance companies like TK to reimburse cannabis claims went into effect, the company has just issued what would surely be a best-seller if it were being sold.All of the medical cannabis now being prescribed and reimbursed is coming from abroad.

The Cannabis Report, as it is titled, produced with the help of professors at the University of Bremen, is also the first of its kind. In its pages, along with the corporate summary produced for the recent press conference in Berlin, are several fascinating snapshots of what is going on.

For those who cannot understand German, this summary by Business Insider is quite educational. Here are the major takeaways: There are now almost 16,000 German patients who are receiving some kind of medical cannabis by prescription. From a doctor. These patients are also paying about $12 for their monthly supplies – even if they have to wait for reimbursement. This is in contrast to the 1,100 patients who managed to obtain cannabis by prescription and pay for it themselves before the law changed last spring.

Do the math and that is a 1,450% uptick. Add in the additional 15,000 left out of this report who are getting cannabis prescribed but their claims turned down, and that is an even more amazing story.

Here is the next obvious fact: All of the medical cannabis now being prescribed and reimbursed is coming from abroad. A significant amount is still coming from Holland. The rest? Canada.

For that reason, the cost of medical cannabis is a major concern, along with the medical efficacy of cannabis and the authors’ frustrations about dosing.

The most interesting takeaway? Chronic pain and spasticity arehigh on the list of prescriptions (MS is currently the only condition which is “on label” for cannabis). So is Epilepsy and AIDS. Most interestingly are the high numbers for ADD. This is also highly significant in a country where amphetamine prescriptions for the same are almost unheard of.

TK, like the other health insurers who have started to provide numbers, also approved approximately two thirds of the requests they received. And it has cost them $2.7 million. That bill will begin to reduce as Germany cultivates medical cannabis domestically. However, the tender bid, which now apparently includes 11 contenders, is still undecided, with growing apparently pushed off now until (at the earliest) sometime next summer.

The bottom line, however, in the report from Socium, a university-based think tank that focuses on social inequality, is that cannabis is a drug that should also be treated like any other medication. Even though study authors conclude that so far, they do not find cannabis to be as “effective” as other drugs, they clearly state that the drug does help patients.

Flip to page 20, however, and the authors also confirm something else. The top companies providing medical cannabis to German publicly insured patients who are getting reimbursed are Bedrocan, Aurora andCanopy. Aurora’s brands clock in at the highest percentage of THC, although their German importer Pedianos, clearly offers a range of products that start at less than 1% and increase to 22%. MedCann GmbH (renamed Spektrum last year) is essentially providing the rest, and ranges of THC at least, that go from 5.4%-16.5%. They also provide the products with the highest percentages of CBD.

Unlike the other companies, Canopy’s “brands” are also showing up in ostensibly both medical and government reports (Houndstooth, Penelope, Princeton and Argyle). This is interesting primarily because the German government (and regulatory requirements) tends to genericize medications as much as possible.

The next page of the report is also fascinating. Namely a snapshot of what kind of cannabis is being prescribed and at what doses. Patients who are obtaining cannabis flower are getting up to 3 grams a day. Dronabinol, in stark contrast (which is still the only form of the drug many German patients are able to get), is listed at 30mg.

Unlike any corporate report so far, the study also discusses consumption methods (including, charmingly, tea). It is impossible to forget, reading this, how German and structured this data collection has clearly been. There are several fairly stern referrals to the fact that cannabis should not just be prescribed for “vague” (read psychological) conditions but rather aspecific symptomology (muscle spasms and severe pain).

There is also great interest in how flower differs from pills. And how long the effects last (according to the authors, effects kick in about 2-15 minutes after dosing and last for 4 hours). This is, of course, an accurate picture of what happens to just about every patient, in every country. What is striking, particularly to anyone with an American perspective, is how (refreshingly) clinical much of this basic data collection and discussion is.

And no matter how much the authors call for more research, they clearly have observed that cannabis can have positive, and in many cases, dramatic impacts on patients. According to the handy graphs which are understandable to English speakers, study authors find significant evidence that the drug significantly helps patients with severe pain and or muscle spasms – see MS and Epilepsy, AIDS patients with wasting syndrome and paraplegics (wheelchair bound individuals). Authors list the “strong possibility” that the drug can help with Tourette’s and ADHD. Fascinatingly, however, so far, German researchers are not impressed with the efficacy of the drug for Glaucoma. “Psychological” and psychiatric conditions are also low on the list.

Regardless, this is an important line in the sand. As is the clear evidence that cannabis has efficacy as medication.

The great German cannabis science experiment, in other words, is well underway. And further, already starting to confirm that while many questions remain, and more research is required, this is a drug that is not only here to stay, but now within reach of the vast majority of the population.