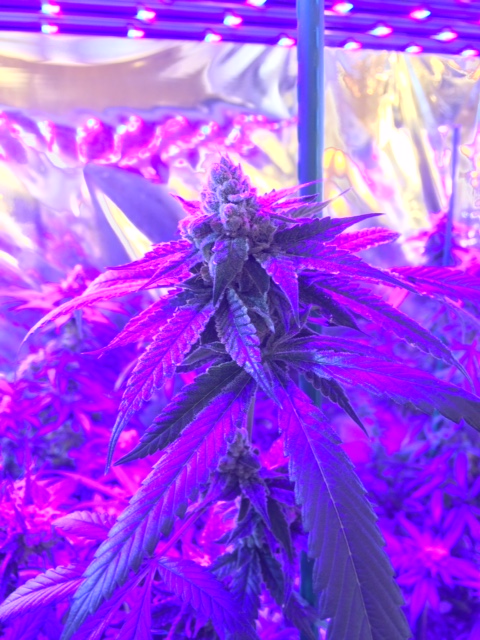 The preferred choice for indoor cannabis growing has long been high-pressure sodium (HPS) 1000-watt light bulbs during flowering. Light-emitting diodes (LED) are quickly changing the indoor farming landscape with innovative technologies and promising energy savings. Many think the technology still needs time to develop. There are certainly many pros and cons to switching an indoor cultivation facility from HPS to LED lighting systems.

Steve Kruss, president of Light-Waves Electronics, Inc., gave a comprehensive analysis of the advantages and disadvantages of various light sources at the CannaGrow Conference and Expo. “The first adopters [of LED light technology] more than two years ago did not get the results they wanted, so many growers gave them a bad rap very early on,” says Kruss. His discussion delved into the pros and cons of both LED and HPS lights in growing cannabis.

It is important to highlight the weaknesses in many common HPS systems and the possible solutions that LED technology could offer. According to Kruss, HPS lights do not match the light spectrum’s photosynthesis curve that plants need to absorb energy. HPS lights give off a tremendous amount of heat that requires more energy to cool a facility down with an HVAC system, increasing energy costs for growers. Since LED’s use 50% less wattage, they produce approximately 50% less heat, significantly reducing cooling costs. HPS light bulbs need to be replaced multiple times per year. Quality LED fixtures can last more than 50,000 hours, or roughly eleven years. “The reality is HPS is putting a lot of light out but that energy is wasted because so much of it is in a light spectrum that plants do not absorb,” says Kruss. Perhaps most important is the lack of ability to vary the light spectrum; any light that HPS bulbs produce that the plant does not absorb is essentially wasted energy.

LED light bulbs provide a solution to the wasted light in HPS by targeting the particular spectrum that plants need for photosynthesis. By targeting the photosynthetically active radiation (PAR), roughly 400-700nm, LEDs can effectively mimic the sun’s ability to produce the wavelength of light specifically needed in a certain stage of cultivation. The absorption spectra and action spectra are wavelengths of light preferable for harvest as well as plant growth and metabolism, respectively. LED manufacturers and growers commonly try to harness the Emerson Effect, which uses red (670nm) and far red (700nm) to increase the rate of photosynthesis.

The benefits of LED lights in growing cannabis are numerous. The primary benefit is that it provides light at the specific wavelengths chosen to match the specific needs of plants. When finely tuned, LEDs can influence the growth process by slowing down vegetative plant growth and inducing flowering when appropriate. LEDs are more energy efficient than their counterparts partially because they give off substantially less heat in the beam itself, reducing cooling costs. Some growers use LEDs together with HPS lights, some use LEDs with natural sunlight in a greenhouse setting and some use strictly LEDs for the entire growth cycle. Each cultivation operation has its own budgetary restraints and structural limitations, but energy efficiency is one area that all growers should look to improve. According to Adam Koh, chief cultivation officer of Comprehensive Cannabis Consulting (3C), indoor growers can get away with T5 fluorescent lamps (which do not consume much energy) throughout the vegetative process.

For some, the debate is over and growers recognize the added benefits that LEDs bring to growing cannabis. According to Kruss, LED technology is almost there. “In terms of yields, LED lights are providing around 75% of the weight that HPS produces, but on the vegetative side, the growth is considerably faster which could make up for that weight loss with faster grow cycles and an extra harvest,” says Kruss.

Adam Jacques, award-winning grower and founder of Growers’ Guild Gardens, has used LEDs in tandem with sunlight. Him and his team have bred and grown cannabis in indoor, greenhouse and outdoor operations. “I love the huge steps that some LED manufacturers have made in the past year,” says Jacques. “When I utilize them within a greenhouse setting I really like the product it grows.” Jacques’ findings in the field echo Kruss’ statements that LED lights have made considerable progress very recently. “It does take a little dialing in due to the plants’ increased feeding regiment, but it is a small price to pay for all of the benefits we see,” adds Jacques. His success with the new technology is representative of a larger trend; more and more growers are beginning to implement LEDs in some form.

Maxx Wiley and Robert Manes, co-founders of Tall Trees LED Company based in Arizona, believe their technology is on par with the yields other growers are getting with different light sources. “We conducted heads-up tests with our 500-watt LEDs versus other 1000-watt HPS bulbs and have seen very impressive results,” says Wiley. “The plants under our lights were consistently getting more weight and more flowers; the flowers appeared smaller but were actually denser and heavier in reality.” Wiley’s company makes commercial LED luminaires that are IP 65 waterproof rated and he claims they never had any issues with failures. The technology uses no moving parts to cool the lights, just metal clad circuit boards, heat sinks and conductive thermal-bonding materials. “We have had customers run potency analyses and have found tremendous variation in plants grown with HPS,” says Wiley. “We see more compound production and more consistency crop-to-crop with our LED technology.” There are currently a handful of manufacturers bringing innovative designs to market.

GS Thermal Solutions, based in Connecticut, manufactures 1000-watt LED fixtures that are liquid-cooled. The company makes lights that are fully adjustable, so growers can dial in each spectrum of light intensity independently and tailor to specific strains as well as stages of growth. According to Rick Rhyins, vice president of sales at GS Thermal Solutions, the liquid cooling technology allows for a much longer lifetime of the LED and a much more efficient energy consumption. “Our technology addresses the shortcomings and previous problems with early generation LED models,” says Rhyins. Coupled with facility automation, GS Thermal Solutions uses a central control system to monitor cooling, light intensity and spectra, nutrient monitoring and feed control.

Yet some are still skeptical of the LED lighting in today’s market and feel the technology is not there yet. Nic Easley, chief executive officer of Comprehensive Cannabis Consulting (3C), has brought over sixty cultivation operations to market and is hesitant to endorse the technology at this point. “I will never be an early adopter when it comes to new lighting technology and I feel we are at least a year out from seeing consistently efficient LED lighting,” says Easley. “There are still a lot of false claims out there and I want to wait until I see repeatable results on a small scale before I feel comfortable endorsing LED lights for cannabis cultivation.” While companies will continue to innovate lighting solutions for indoor cultivation, in many cases (but not all) it seems using the sun to grow cannabis would be more energy efficient.