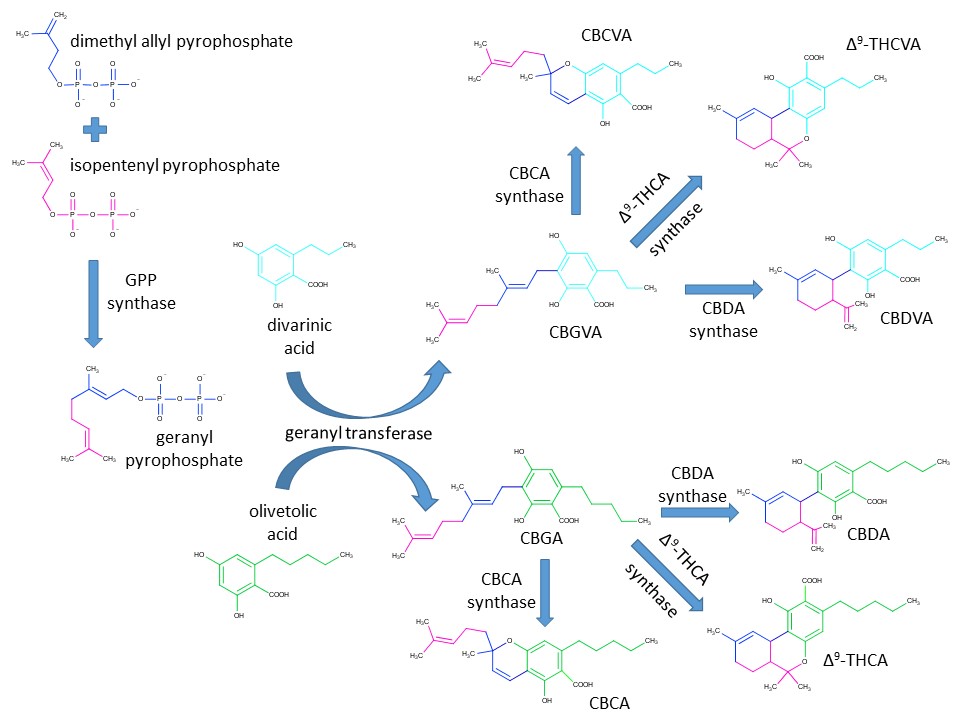 As mentioned in Part 1, the physiological effects of cannabis are mediated by a group of structurally related organic compounds known as cannabinoids. The cannabinoids are biosynthetically produced by a growing cannabis plant and Figure 1 details the biosynthetic pathways leading to some of the most important cannabinoids in plant material.

The analytical measurement of cannabinoids is important to ensure the safety and quality of cannabis as well as its extracts and edible formulations. Total cannabinoid levels can vary significantly between different cultivars and batches, from about 5% up to 20% or more by dry weight. Information on cannabinoid profiles can be used to tailor cultivars for specific effects and allows end users to select an appropriate dose.

Several structurally analogous groups of cannabinoids exist. In total, structures have been assigned for more than 70 unique phytocannabinoids as of 2005 and the burgeoning field of cannabinomics seeks to comprehensively measure these compounds.¹

Potency Analysis by HPLC and GC

Currently, HPLC and GC are the two most commonly used techniques for potency analysis. In the case of GC, the heat used to vaporize the injected sample causes decarboxylation of the native cannabinoid acids. Derivatization of the acids may help reduce decarboxylation but overall this adds another layer of complexity to the analysis² ³. HPLC is the method of choice for direct analysis of cannabinoid profiles and this technique will be discussed further.

A sample preparation method consisting of grinding/homogenization and alcohol extraction is commonly used for cannabis flower and extracts. It has been shown to provide good recovery and precision² ³. An aliquot of the resulting extract can then be diluted with an HPLC compatible solvent such as 25% water / 75% acetonitrile with 0.1% formic acid. The cannabinoids are not particularly water soluble and can precipitate if the aqueous percentage is too high.

To avoid peak distortion and shifting retention times the diluent and initial mobile phase composition should be reasonably well matched. Another approach is to make a smaller injection (1-2 µL) of a more dissimilar solvent. The addition of formic acid or ammonium formate buffer acidifies the mobile phase and keeps the cannabinoid acids protonated.

The protonated acids are neutral and thus well retained on a C18 type column, even at higher (~50% or greater) concentrations of organic solvent² ³.

Detection is most often done using UV absorbance. Two main types of UV detectors are available for HPLC, single wavelength and diode array. A diode array detector (DAD) measures absorbance across a range of wavelengths producing a spectrum at each point in a chromatogram while single wavelength detectors only monitor absorbance at a single user selected wavelength. The DAD is more expensive, but very useful for detecting coelutions and interferences.