On November 1st, the Bureau of Cannabis Control (BCC) sent notices to 394 businesses in California that their licenses will be suspended until they comply with certain traceability system requirements. This story was first reported by John Schroyer at Marijuana Business Daily.

On Wednesday, November 6th, the number of licenses suspended dropped to a total of 385, including 63 retailers, 61 delivery services, 47 microbusinesses, 185 distributors and 29 transportation licenses. That’s almost 5% of all the cannabis business licenses in California.

According to Alex Traverso, spokesman for the BCC, licensees were given plenty of opportunities to fix their errors. Businesses were given notice that they needed to enroll in Metrc within five days following their provisional licensing. The BCC gave those businesses a reminder roughly three months ago and sent an additional warning in late October regarding the deadline.

It’s a relatively easy fix for those trying to get back in compliance. The rationale behind suspending the licenses is that those businesses need to undergo a mandatory traceability system training so they know how to use Metrc and get credentialed. Enroll in the Metrc system, get credentialed and your license should be restored.

Traverso added that about 80 businesses enrolled in the Metrc system as soon as they received the notice that their license is suspended. Those licenses should be restored to active shortly, Traverso said. 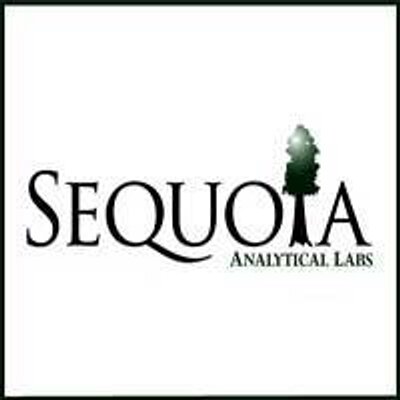 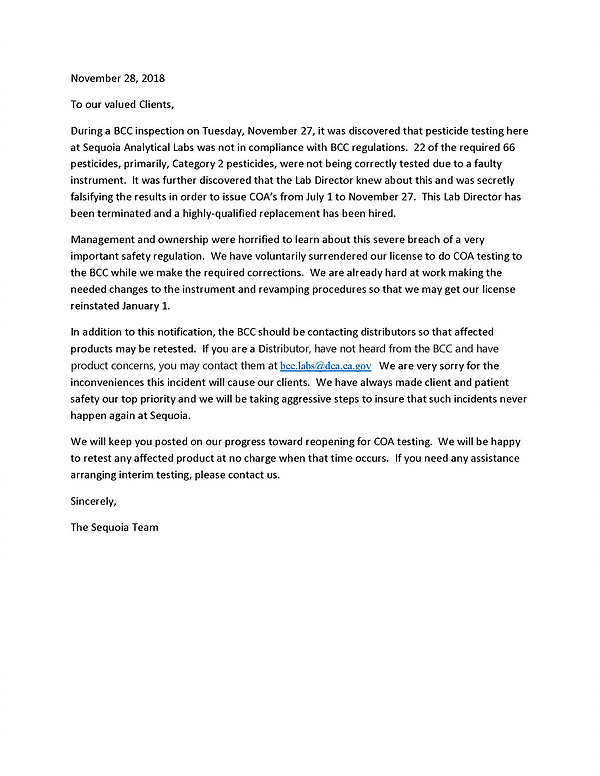 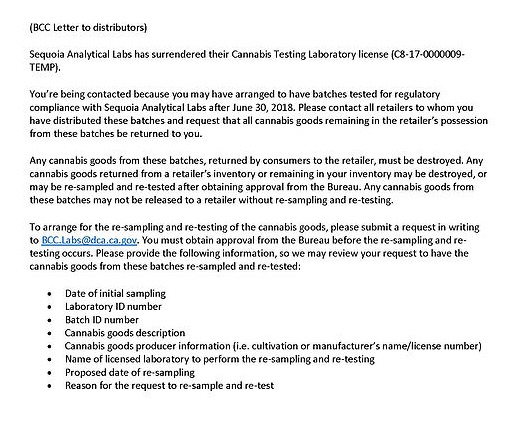 For the second time in six months, the Washington State Liquor and Cannabis Board (WSLCB) took swift and severe action on a cannabis business licensee operating in the black market. The regulatory agency issued an emergency license suspension for Port Angeles’ North Coast Concentrates, which are effective for 180 days, during which time regulators plan on revoking the license altogether.

According to a release emailed last week, the violation was uncovered during a routine traffic stop. “On September 20, 2018 an employee of North Coast Concentrates was pulled over by Lower Elwha Police, during the course of the traffic stop officers found 112 grams of traceable marijuana concentrates, three large jars and a large tote bin of untraced dried marijuana flower,” reads the release. “The products were not manifested in the state traceability system. Subsequent investigation by WSLCB officers revealed that the untraced product had been removed from the licensees grow operation and that the traced concentrates were returned from a marijuana retailer in Tacoma several weeks earlier.”

The release goes on to add that when regulators investigated the matter, they found text messages indicating the license holder’s complicity in the act. When the WSLCB suspended the license, officers seized “556 pounds of marijuana flower product, 24 pounds of marijuana oil and 204 plants from both locations.” Regulators say, “the severity of these violations and the risk of diversion” is the reason for the emergency suspension and product seizures.

According to the end of the release, The WSLCB issued one emergency suspension in 2017, and six in 2018. One of those was roughly six months ago in July when regulators issued an emergency suspension for a Tacoma-based cannabis business for the same reason as the most recent one- diversion.

The enforcement branch of the WSLCB acted on a complaint and inspected Refined Cannabinoids where they found “numerous and substantial violations including full rooms of untagged plants, clones and finished product,” reads a release emailed back in July. “During the course of the inspection officers discovered and seized 2,569 marijuana plants, 1,216 marijuana plant clones, 375.8 lbs. of frozen marijuana flower stored in 11 freezer chests, 3,423 0.5 gram marijuana cigarettes, and 97.5 lbs. of bulk marijuana flower without the requisite traceability identifiers.”

That July release also states that enforcement officers found evidence of diversion to the black market, in addition to the company not tracking their product. “Traceability is a core component of Washington’s system and essential for licensee compliance,” says Justin Nordhorn, WSLCB chief of enforcement. “If our licensees fail to track their product they put their license in jeopardy.”

Pennsylvania Medical Solutions, LLC (PAMS), won a license to grow medical cannabis in Pennsylvania, but some think the Pennsylvania Department of Health (PA DOH) should reconsider awarding that license. PAMS is a subsidiary of Vireo Health, which has medical cannabis licenses in New York and Minnesota, as well as quite the blemish on their business record. In December 2015, two former employees were accused of breaking state and federal laws by transporting cannabis oil from Minnesota to New York. Because of that history, some are questioning why exactly they were awarded the PA medical cannabis license.

In that school of thought is Chris Goldstein, a Philadelphia-based cannabis advocate and author of an article on Philly.com, which calls PAMS’ license into question. According to Goldstein, Vireo Health could lose their licenses in New York and Minnesota, and those former employees involved might even face federal prosecution. “On the surface it would seem that Vireo broke every rule in the book,” says Goldstein. “Not only could the company lose its permits in both of those states, but employees could face federal prosecution for interstate transport and distribution.” But does that previous wrongdoing by two former employees have any bearing on their application in PA? In Maryland, it did. According to The Baltimore Sun, concerns surrounding MaryMed’s parent company, Vireo Health, is the main reason why their permit to grow medical cannabis was revoked.

In response to some of those concerns about their PA license, Andrew Mangini, spokesman for Vireo Health, issued the following statement, which appeared in Goldstein’s article: “While we’re aware of allegations against two former employees of an affiliate, those individuals have never had a role in our application or in the management of PAMS,” says Mangini. “It’s also important to note that our Minnesota affiliate and our parent company Vireo Health have not been accused of any wrongdoing in connection with those allegations.”

Below is a timeline of events leading up to the PA DOH defending their decision to give PAMS a license:

April Hutcheson, spokeswoman for the PA DOH, told Philly.com in June, “Remember, the permits are given to business entities, not people.” The point she is making refers to the charges being filed against former employees, not any of the businesses who hold medical cannabis licenses.

Steve Schain, Esq., an attorney with Hoban Law Group in Pennsylvania, has seen no objective evidence of anything wrongful in either PAMS’ application or the DOH’s processing of it. “Marijuana related businesses often have distinct, affiliated components and the Department of Health faces two critical issues,” says Schain.

“First, whether grow applicant PA Medical Solutions, LLC (PAMS) had a duty to disclose alleged wrongdoing on its application, failed to fulfill this duty and, if so, whether PAMS’ application should be amended, re-scored or disqualified. Second, as part of its ongoing license reporting requirements, whether grow licensee PAMS has any duty to disclose the alleged wrongdoing. The answer to much of this hinges on whether criminal or administrative charges were leveled against just Vireo Health’s former employees or also included the entity and whether these individuals or enterprise fell within Pennsylvania Medical Marijuana Organization Permit Application definition of an “Applicant” (“individual or business applying for the permit”) or applicant’s “Principals, Financial Backers, Operators or Employees” of PAMS. Either way, it does not presently appear that the [PA] DOH missed anything.”

This does raise the question of whether or not Vireo Health is under investigation, which is yet to be determined. According to Goldstein in his Philly.com article, the Minnesota DOH declined to comment on Vireo Health and the New York DOH says the department’s investigation is ongoing. “The selection of a Vireo Health affiliate to grow and process medical cannabis in Pennsylvania has cast a serious shadow over the integrity of the program even before it has started,” says Goldstein.

In Maryland, the DOH revoked their license as a direct result of those former employees in Minnesota committing crimes, according to The Baltimore Sun. Commissioner Eric Sterling said there is “a reasonable likelihood of diversion of medical cannabis by the applicant.” So should Pennsylvania do the same? Do those crimes by former employees have any bearing on their application? This story raises a number of questions regarding applications for state licenses that are largely left unanswered. One thing we know for certain: each state handles applications very differently.