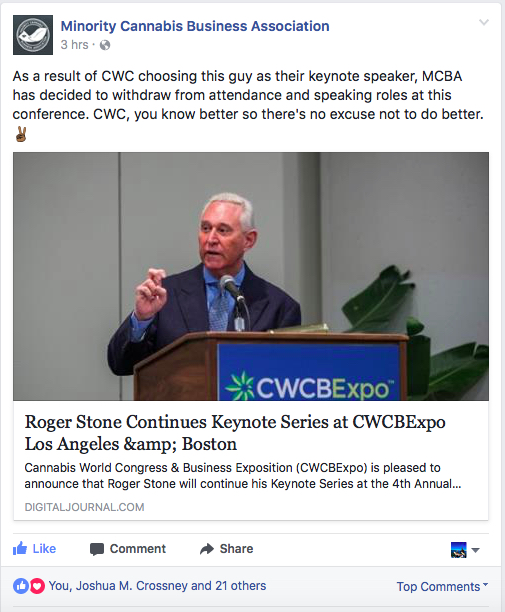 Update: According to a press release, the CWCBExpo removed Roger Stone as the scheduled keynote speaker for the Los Angeles and Boston shows. We applaud their decision.

Earlier today, the Minority Cannabis Business Association published a Facebook post: “As a result of CWC choosing this guy as their keynote speaker, MCBA has decided to withdraw from attendance and speaking roles at this conference. CWC, you know better so there’s no excuse not to do better.” We at Cannabis Industry Journal would like to voice our support for the MCBA and join them in their withdrawal. We will no longer be a media partner of any CWCBExpo events, unless they remove Roger Stone from the keynote slot.

Stone is quite the polarizing figure with a mile-long political career rife with controversy and extraordinary clientele. He co-founded a lobbying firm with Paul Manafort in 1980. In the 1970’s, Stone helped Richard Nixon get elected, the man responsible for the War on Drugs, and proceeded to serve in his administration. In the 1980’s, he never strayed far from controversy. He helped bribe lawyers to help get Reagan elected, and even did lobbying work on behalf of two dictators.

Fast-forward to the 2016 presidential election and Stone’s racism starts to come to light. Although he left the Trump campaign in August of 2015, he remained a loyal supporter. In February of 2016, CNN banned Stone from their network for disgusting tweets about correspondents. He called one CNN commentator a “stupid negro” and another an “entitled diva bitch.” MSNBC subsequently banned him from their network two months later. While he said he “regrets” saying those, he never issued a formal apology. A majority of his tweets are too offensive to republish, but if you need more proof, click here.

He accused Khizr Khan, a Pakistani-American whose son was a war hero in Iraq, of being a “Muslim Brotherhood agent helping Hillary.” That is far from the only conspiracy theory he has circulated. He also said Huma Abedin, an aide to Hillary Clinton at the time, was in the Muslim Brotherhood. He’s written a number of books with rampant, false allegations, like Jeb! and the Bush Crime Family, The Clintons’ War on Women and The Man Who Killed Kennedy: The Case Against LBJ. His role in the Trump campaign is a part of the Russian election hacking congressional investigation. He’s credited with introducing Alex Jones, the falsehood-spreading, InfoWars conspiracy theorist, to Donald Trump. On the night of the election, he tweeted a racist photo that is not fit for republication.

Why is this relevant?

Because all of a sudden he is an advocate for cannabis legalization. In 2013, he started working in Florida to help legalize medical cannabis there. According to a CWCBExpo press release, when he keynoted their New York conference this year, he announced that he was starting a sort of bipartisan coalition to persuade President Trump to follow through with his campaign promises to respect states’ rights with regard to legal, medical cannabis. “I am going to be working with a coalition of Republicans and Democrats, progressives and libertarians, liberals, and conservatives to persuade President Trump to keep his campaign pledge, and to remind the president that he took a strong and forthright position on this issue in the election,” says Stone at the New York show. Dan Humiston, managing partner of CWCBExpo, says, “We are thrilled to have Roger Stone keynote again during CWCBExpo Los Angeles & Boston.”

CIJ reached out to the CWCBExpo for comment and Dan Humiston, managing partner, stands by their decision to keep him booked as the keynote speaker:

“Our objective as a show producer in the cannabis industry is we are trying to do whatever we can to help grant access to this plant for anybody that needs it. And to do that we feel that we have to be as inclusionary as we can possibly be. It is nothing more than that. I think there are some real benefits to the cannabis movement that will be gained by getting as many people under our tent as we can. Its funny how this plant brings people together who aren’t together under any other topic; it creates the strangest of bedfellows. The more dialogue and more opportunities to speak with people we can’t agree on any other topic with, the better. I think he is an asset to this movement. He has raised a lot of money. He is pushing Jeff Sessions really hard and he’s got Donald Trump’s ear.”

CIJ also reached out to Reverend Al Sharpton, who is booked for a keynote presentation at the same conference, and he had this to say: “I was not aware that the minority cannabis business association pulled out from the conference,” says Rev. Sharpton. “I spoke at the conference in New York, and I am working with Senator Corey Booker on the legalization of cannabis. Our communities have been directly affected by the criminalization of the drug.” He said he was unaware of the MCBA’s statements and asked for them to get in touch with him as soon as possible.

There’s no place for racism in the cannabis industry.

Yes, it’s great to have an ally of cannabis legalization who might have Trump’s ear. But no, we don’t want Stone’s help. There is no place for someone like him in the cannabis industry.

The historical implications of racism in the cannabis legalization movement should speak for themselves, but allow me to try and quickly summarize why this is so important. The word marijuana is actually a dated racist epithet that Harry Anslinger used back in the 1930’s to promulgate myths that the drug was used by people of color and fostered violence. “Marijuana is the most violence-causing drug in the history of mankind… Most marijuana smokers are Negroes, Hispanics, Filipinos and entertainers. Their satanic music, jazz and swing, result from marijuana usage,” said Anslinger, testifying before Congress. And so begins the era of “Reefer Madness” when the drug became illegal. Fast-forward half a century and the racism with cannabis continues. According to the Minority Cannabis Business Association, the War on Drugs is the main reason behind the huge incarceration numbers for people of color. “The U.S. ‘war on drugs’ — a decades-long policy of racial and class suppression hidden behind cannabis criminality — has resulted in the arrest, interdiction, and incarceration of a high percentage of Americans of color,” reads their agenda.

There are still a lot of racial problems the legalization movement is working to address. There are dozens of reasons why people of color have been wrongly persecuted due to the illegality of cannabis, but the point is this: The cannabis legalization movement needs to be a diverse, inclusive community that promotes equality and embraces all religions, races and ethnicities.

In choosing Roger Stone to keynote, the CWCBExpo is making a Faustian bargain and we don’t believe this is right. We need to stand by our morals; the ends don’t justify the means. The cannabis industry is no place for racism and we would like to see Roger Stone removed from the keynote position at CWCBExpo.