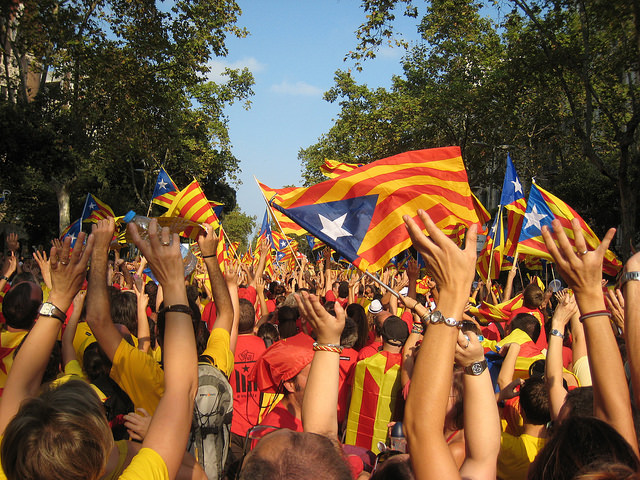 The politics of pot have always been strange. Everywhere. In the modern age of legalization, the battle lines around reform always seem to find expression in the faults if not flames of other highly divisive issues.

It has certainly been true in the United States. And now that has come to Europe.

Where Are The Spanish Fault Lines?

The recent independence bid of Catalonia, up until now, an “autonomous” region of Spain, has all the hallmarks of the same. Catalonia is, in essence a Spanish state, in the northeast corner of the country along the Mediterranean coast. The region also has, outside of its separatist ambitions, pioneered the cannabis club movement. Barcelona of course is the capital of it all. And since the summer of 2017, the continued legalization of the industry here has caused ripples throughout Europe on the recreational and medical cannabis fronts.

Spanish politics are a bit complicated, but basically since the end of fascist rule in 1977, there are a few states with a little more independence from Madrid than others. Catalonia and Barcelona in particular have since flourished as both the economic powerhouse of the country and, incidentally, canna-club reform. Entrepreneurialism in general is high here.

But the idea of the Basques or Catalonia “succeeding” is about as unlikely as Scottish independence.

As a result then, where goes the newly legit cannabis club vertical? Will Madrid put a kibosh on that along with “home rule?”

In many ways, Catalonia’s cannabis industry is the next iteration of Amsterdam’s coffee shops. The only difference has been a membership fee rather than an instant cash transaction at retail point of sale. That said, there are many obvious similarities. The supply chain feeding the clubs with product has up until now, flourished in between the grey lines of the law.

The same arguments for legalization also exist here as they do everywhere else – if not perhaps so colourfully. The Catalonian paella of legalization advocates include those who rely on the drug for medical purposes plus those who believe they should have the right to recreational use. And of course, this also includes the police. The latter of whom, who at one point, were seizing so that plants quickly overtook evidence rooms. Spanish creativity in reconverting existing real estate to undercover crop cultivation has created more crop than cops can track down if left unregulated.

However, much like the purple passions of Colorado, this discussion about legalization has also always been drawn, if not flamed, by passions that also occur along other fault lines. In the U.S., over the first decade of this century, legalization of marijuana and gay marriage literally split the country in two. Colorado in fact first voted to ban gay marriage before voting for recreational legalization. California was also an early mover in both gay marriage and legalizing medical cannabis.

The Spanish version of this, of course, is the current Catalan bid for greater independence. And this has plunged the country into its worst political crisis since it returned to democratic government after the forty-year-plus rule of the fascist dictator Franco, if not the failed coup in the early 1980’s to re-establish military rule.

It is also not a trivial question to ask what will happen to the cannabis industry that has begun to flourish here if Madrid reimposes direct rule? While the industry that has been legalizing over the past three to four years, this summer, Catalonia moved finally to legalize cannabis cultivation and consumption across the board.

While that may seem to be a stupid if not irrelevant question– at least outside the cannabis industry itself – it may be highly relevant to what comes next.

Catalonia has been the economic engine of the Spanish economy since Franco. In fact, that is one of the reasons that Madrid could never allow the region to split away. Another undeniable reality? The only thing that Catalonia does not have complete control over is its taxation and the redistribution of said funds to the rest of the country (including the equally separatist-inclined Basques just to the north). Not that Catalans really seem to be all that sure about this desire of full independence. In fact, the succession vote itself, much like Brexit, seemed to be more a criticism of politics in Madrid rather than a desire to become fully independent of it.

It is also unlikely that the recent cannabis business will go away – no matter what happens with direct rule. Catalonia’s decision to proceed with full legalization was intended to become, much like Colorado turned out to be. A guideline for better clarification on the federal level. If not a blueprint for other regions to follow when it comes to cannabis clubs.

There are very dramatic statements still flying between parties in Madrid and those who seek to stimulate if not agitate for greater independence. But that is unlikely to happen for several reasons beyond internal Spanish politics. European leaders are not encouraging another Brexit. This, to both Emmanuel Macron and Angela Merkel, is an internal, domestic issue. And the locals are still very unsure about the next steps.

Is There A Connection Other Than Timing?

Things are starting to change – and dramatically on many fronts. There are political fault lines everywhere, where marijuana is showing up in strange forms and incarnations. The delay on the German bid is apparently another one.

There is also a clear connection just about everywhere between cannabis reform and the desire for something different . Whatever that might be. Including broader political change.

What does that mean? For the industry specifically? For the market that is developing in Canada, Europe and elsewhere, political and operational risks are some of the equations contributing to the bottom line.

There is also this reality. To date, the real money in the Spanish market is also being made in medical. Or about to be. See the Alcaliber alliance with Spektrum. No matter how attention grabbing the Spanish headlines may be, the larger game moves forward inevitably. As does medical reform, plus greater access even without the cannabis club economy.

Could there be a pot-themed compromise to what troubles the land where the rain falls mainly on the plain? Sure. Givebacks of a financial kind, including for example, the right to keep all pot taxes local, might be solutions that could be tried if there is an attempt to defuse a situation that is tense. And still on an uncertain course.