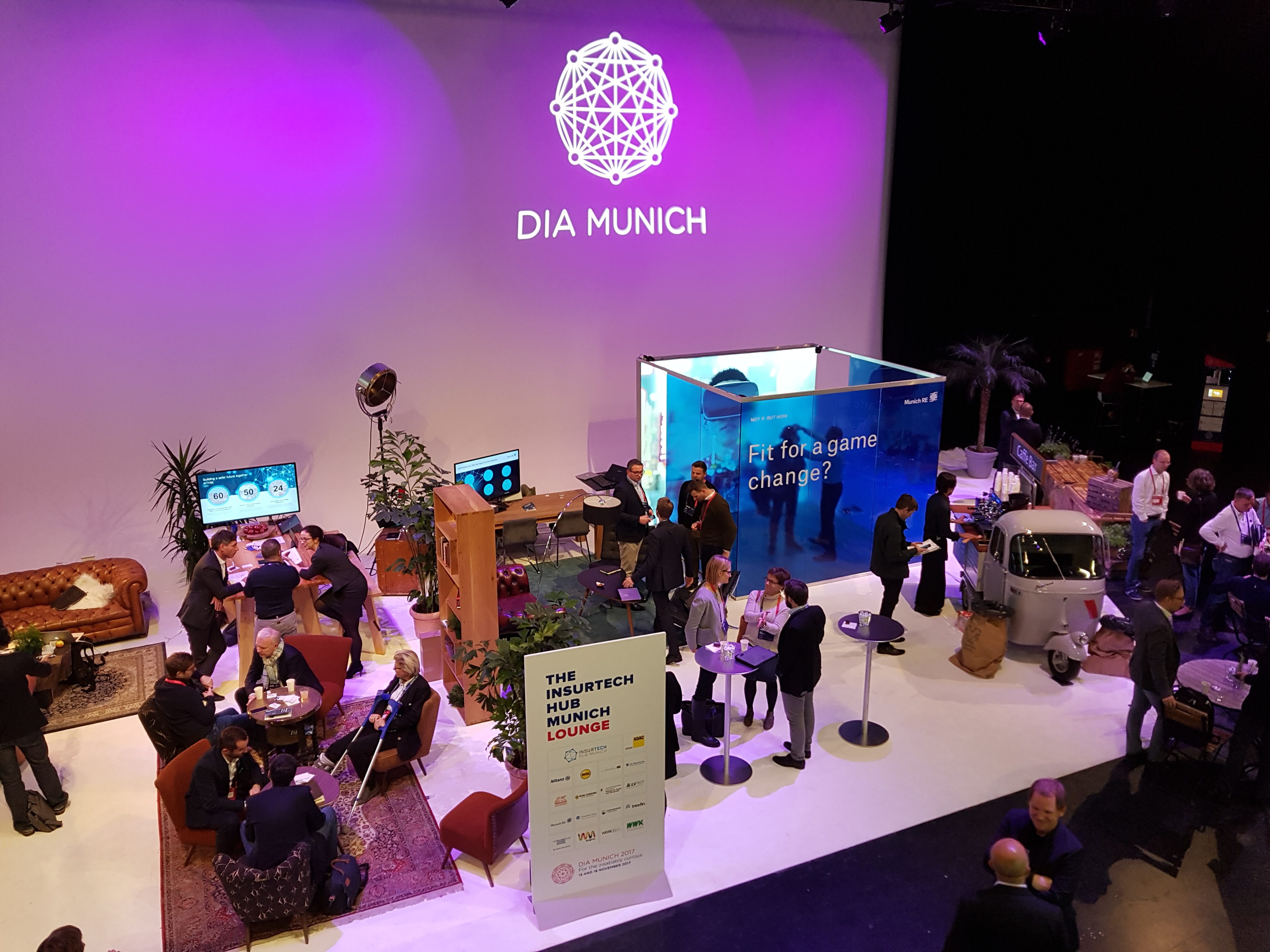 Munich, Germany- In a darkened movie studio on the east end of town, the Digital Insurance Agenda or DIA, the largest insurtech conference in the world, kicked off its annual event in mid-November. The sold-out event attracted about 1,000 top insurance executives from 40 countries and all six continents.

CannabisIndustryJournal attended from the perspective of investigating the overall status of digitalization in the industry. However, there were a couple of things we were on the hunt for. The first was to see how and where blockchain has begun to penetrate the industry. This revolutionary processing and identification layer of digital communications is coming – and fast – to the insurance industry everywhere.

We were also there of course to see if cannabis was anywhere on the agenda. Digitized or not.

By way of disclosure, I am also a high tech entrepreneur with my own insurtech, blockchain-based start-up that we are in the process of launching. MedPayRx is intended to be the first insurance product that will help patients access their meds facing nothing but their co-pay and help insurers automate the approvals process for all prescription drugs and medical devices.

By definition, in Germany, this includes medical cannabis.

Ultimately, our mission is to take the paper and the pain of all reimbursement out of the prescription process. At present, as anyone with a chronic condition knows, many medications and medical devices must be paid for out of pocket first and then reimbursed via a claims process that is paper-based, laborious and expensive. This is not a model that works for anyone. Certainly not poor and chronically ill patients who face this process at least monthly. And certainly not insurers who are now facing higher drug costs if not more claims reimbursements for the same from an aging population.

In a country like Germany where 90% of the population is covered by public health insurance, the situation also poses quandaries of a kind that are rocking the fundamental concept of inclusive public healthcare.

The Impact of Digitalization On The Insurance Industry

As one insurance executive and speaker mentioned from the stage during DIA, there are few industries that are more universally despised than insurance in general. And few verticals where the existing mantra is “you cannot do it worse.” The insurance industry is well aware of that. Further, for all insurances that are not “mandatory” the competition is fierce for consumers’ bucks. Particularly in places like Europe where insurance is also seen as a kind of savings scheme. If you are a private insurer, of any kind, or offering services to both end consumers and B2B services, you are out of the game if you are not now thinking how to streamline and upgrade all aspects of your business in the digital era. There are many start-ups now tackling what is euphemistically called “cloud2cloud” integrations.

What does that mean?

According to DIA co-founders Reggy de Feniks and Roger Peverelli, the influence of tech in general is here to stay and is now driving widespread innovation across the industry. “The DIA line-up and the massive response among the audience show that insurtech is now mainstream,” says de Feniks. “This edition clearly showed the…ever growing attention for artificial intelligence, machine learning and other shapes of advanced analytics.”

“Platform thinking, thinking beyond insurance and creating new insurtech enabled services will be the next challenge for insurers,” added Peverelli.

Subtext? Insurers want your data. They want to use tech to analyse and understand it. The technology is here. But is the regulation? Specifically, in an industry that wants to know everything about you, how is privacy understood and implemented with revolutionary tech?

Paper is rapidly becoming an old-fashioned concept in insurance, much like it has in banking. And like banking, insurance has a strong “financial” side to it. Germans, for example, tend to use insurance policies as retirement accounts, (the idea of a 401K is almost unheard of here). And by far, the most dynamic and digitalized part of the industry tends to be in areas unrelated to healthcare.

Some of the most interesting start-ups at DIA were actually weather-based. The challenges of these types of insurtechs of convincing both regulators and the industry that such services are not only feasible but needed, pale in comparison however, to the challenge now facing all public health insurers.

And while they were certainly present at DIA, this industry segment was underrepresented at the November gathering. There is a reason for this. The real threat to consumer medical privacy is only growing, not receding in an era where data can be seamlessly transferred globally and digitally.

For that reason, blockchain has many uses and applications in this part of the vertical.

MedPayRx – even as a pre-seed start-up, was not, even this year, the only blockchain-based service we found in attendance at DIA. Next year look for even more.

Blockchain might be the next new “buzzy” tech, but in the insurance industry, there is a real reason for it.

What Was The Response To A Cannabis-Themed “Insurtech?”

As readers in the United States know, health insurance and cannabis is a loaded subject. And while insurance services are beginning to be available as high-risk commercial services for the industry, inclusive health insurance is still off the table because of the lack of federal reform.

Other places, however, the issue is taking a fascinating turn. And in Germany, right now, the situation so far has shaped up to be cannabis vs. public health insurance. It is a mainstreaming trial drug in other words. For that reason, beyond any lingering but rapidly fading stigma, it is a fertile time to be in the middle of it, with a tech solution.

It is also perfect timing from the digitalization and privacy perspective. Unlike the U.S., Germany in particular has tended to keep its insurance services, certainly on the health front, undigitalized because of privacy concerns. That is no longer feasible from a cost perspective. It is also increasingly one that has to be dealt with from a tech and regulatory one.

Why Is CannabisIndustryJournal At DIA?

My nametag identifying me as both “media” and of a certain green source, was the source of endless discussion with everyone I talked to. Many attendees were extremely curious about why a cannabis industry publication was at an insurance conference. And most people, certainly the non-Germans in attendance, were unaware that per federal law, cannabis is now, at least in theory, covered by public health insurance here. Medical insurance that treats cannabis just like “any other drug” is a discussion at the forefront of the medical community in Europe. Even if not at health insurance industry events like DIA. Yet. In the last year, in fact, Dutch insurers have started refusing to cover the drug as the German government moved forward on mandating coverage.

In other places, like Australia, Israel and Canada, the conversation is also proceeding, albeit slowly within the context of public health coverage.

However compliance and tracking of the drug itself, not to mention the need for research on how cannabis interacts with other drugs mandates a consideration of how digital health records, privacy and tracking can exist in the same conversation. And further, can be accessed by the insurance industry, the government and policy makers as reform moves into its 2.0 iteration – namely federal recognition of the drug as a legitimate medicine.

We at MedPayRx think we have one answer. And next year, we hope to present from the stage as we continue to move forward with engaging the insurance industry here on all such fronts. Not to mention helping move the conversation forward in other places. And of course, launching services.